an update on whole30 + a few recipe faves 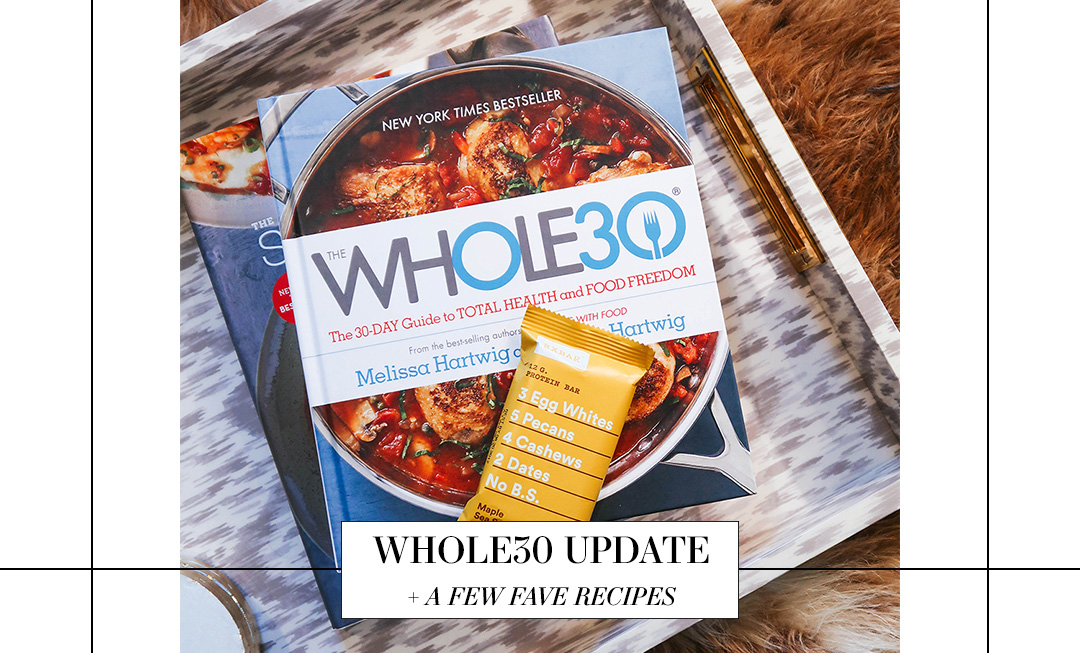 I’ve received a bunch of questions regarding Whole30 since I began the challenge on the 4th, so I’m working on a few different posts for you on the topic! Today’s post is to share a little bit of an update and a few of my favorite recipes I’ve made this month. Here’s a list of the questions I’ve received most often while taking part in Whole30:

To answer the first question, I definitely think it depends on your eating habits prior to starting Whole30. Over the last couple of years, I’ve generally stuck to a pretty clean diet throughout the week: lots of veggies, lean meats and fruit. Other than the occasional weekend splurge, big night out or a few days of travel, I’ve been good about what goes into my body. With that said, I had a major sweet tooth that I satisfied regularly, so sugar was the main draw for me doing Whole30.

While I felt I have cut out a lot doing Whole30, I also feel like I’ve been eating significantly more (volume and calories) than I was prior to starting Whole30. More meat, more vegetables, more fruit… more of everything. Because of this, and the fact that I was eating pretty clean before I started this journey, I have not had a dramatic drop in my weight. Honestly, if I’ve lost anything, it may be a pound or two. Losing weight wasn’t my main goal, but I would have liked to have lost a few pounds. Like I said above, if you’re already eating well, Whole30 may not be the dramatic difference you’re looking for!

The second question is similar to the first for me… I think because I was already eating healthy before I started Whole30, the improvements and differences weren’t as dramatic on me as they would be on someone who eats pizza, burgers, and mac & cheese every day. The one big improvement for me is that I don’t crave sugar quite like I thought I did, and that I actually have a sense of self-control. It’s been gratifying proving to myself I do have the will-power to withstand my cravings! Every time I used to crave sugar I would satisfy the craving with fro-yo, a popsicle, a cookie… really whatever I could find. Now I know to grab a La Croix first, and if I’m really hungry, I’ll eat some fruit.

To answer the third question: yes and no. I do want to continue not eating processed foods, added sugars, etc, but I will be adding back in some dairy – cheese, mainly. It’s a big part of my favorite meals, adding flavor, texture, etc to salads, veggies and the like. Before Whole30 I didn’t really ever consume alcohol during the week, and drink socially on the weekends. I think that’s a good balance, don’t you? I’m going try to be mostly paleo when cooking for myself at home going forward, and then let myself off the hook when I’m out with friends. It’s all about balance, and I think as long as I can keep the scales tipped in the healthy direction 85% of the week, I’ll be fine!

See below for my two favorite recipes for breakfast, lunch and dinner below, and I’ve also included links to some of the extra cookware I needed to make some of these dishes. Stay tuned for more Whole30 posts! Up next, I’ll be sharing what I’ve learned from the whole process. 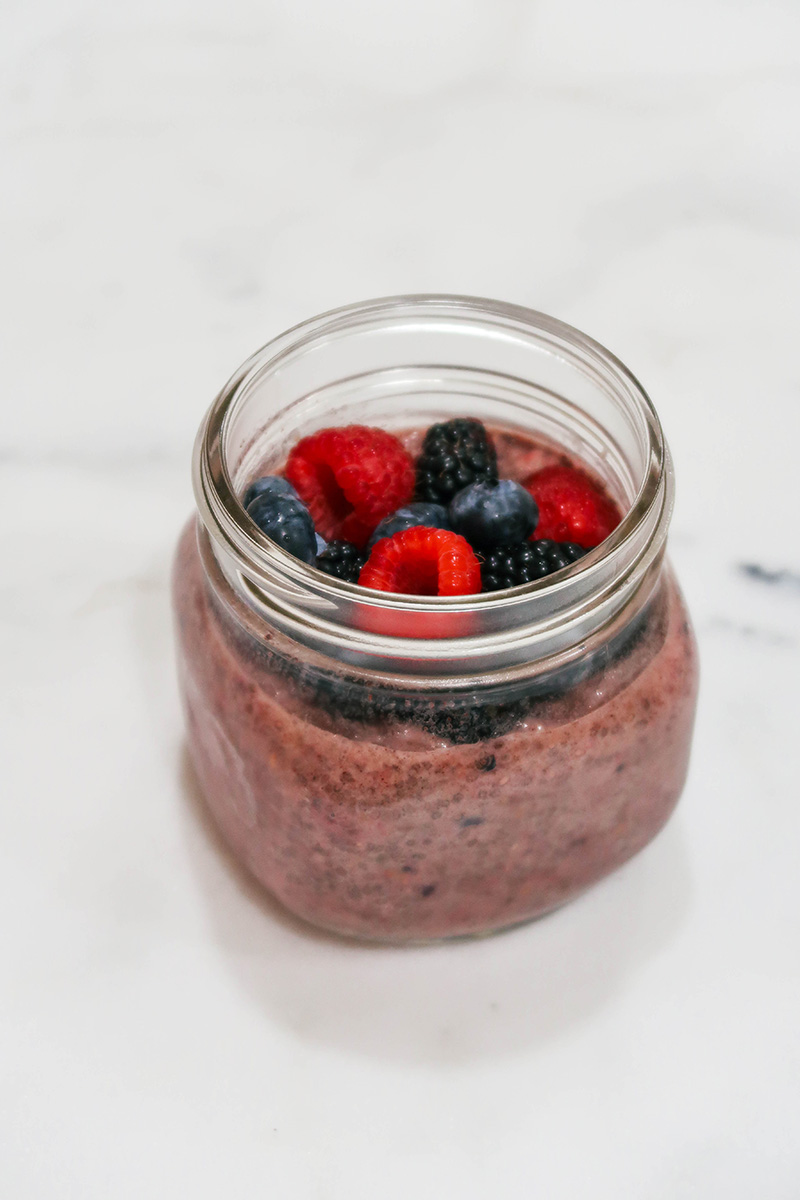 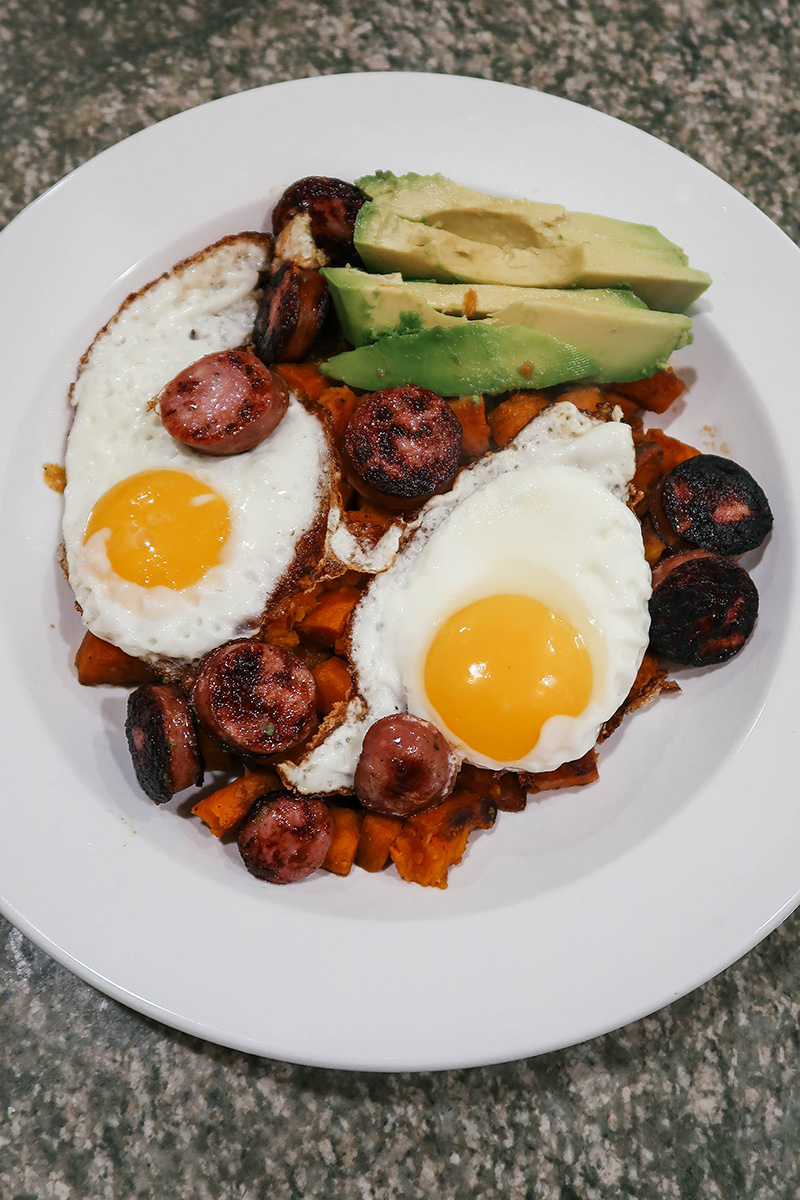 I actually didn’t discover this recipe until earlier this week, and I’m sad I didn’t have it before! It’s a great option for busy mornings, because all of the prep happens the night before. Just throw on a couple more berries, coconut flakes, almonds or whatever other topping you want when you’re ready to eat. So yummy! I added a little extra cinnamon. I ate it Tuesday morning before FlyWheel, and didn’t get hungry again until about 2pm – it gives you a lot of energy and keeps you full for a long time… I’m definitely sold on chia seeds!

You’ve seen me make this recipe a bunch over on SnapChat, for breakfast and dinner. It’s so easy to throw together, and if you make a double or triple batch of the sweet potato home fries, and you can quickly zap them in the microwave later in the week with other fixins. The picture above is one I took when I was making this for dinner! I don’t eat very large breakfasts because of my rigorous workouts in the morning… if you’re planning to make it for breakfast, I’d only fry one egg, cut up half a chicken sausage, and use 1/3 the sweet potato. Otherwise it’s a very large meal! 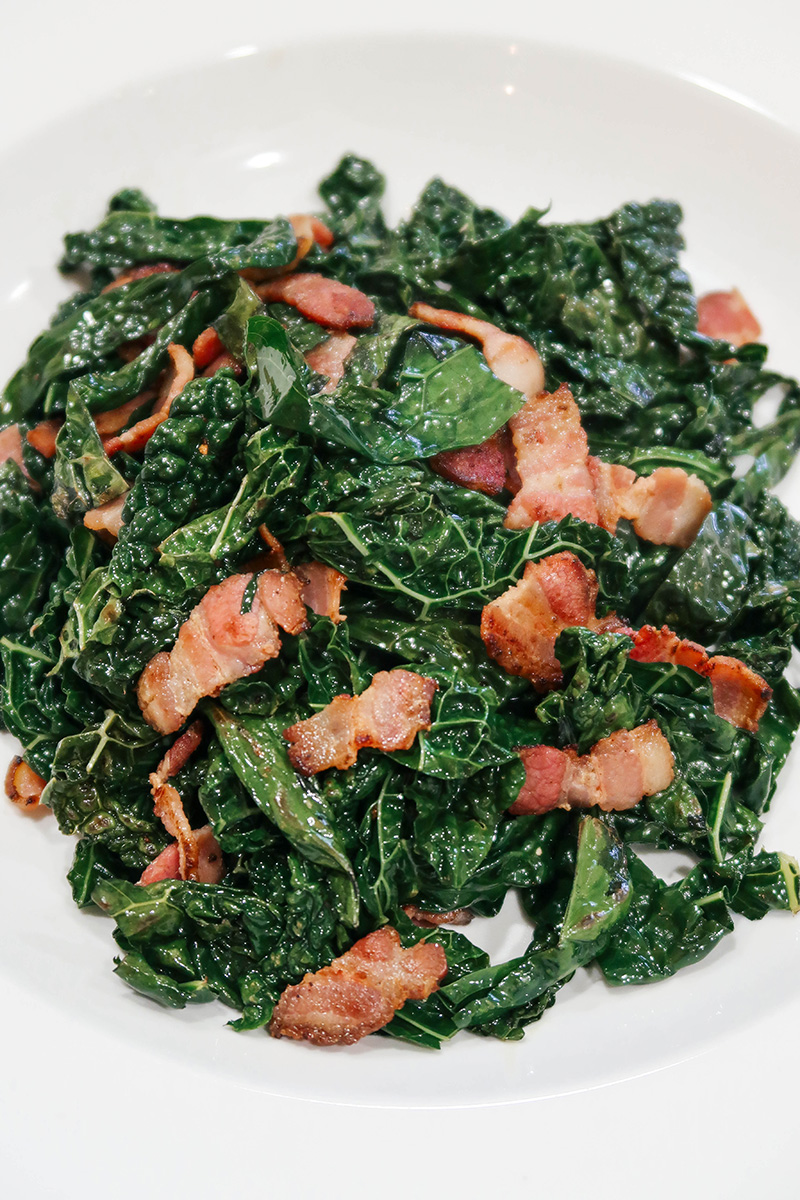 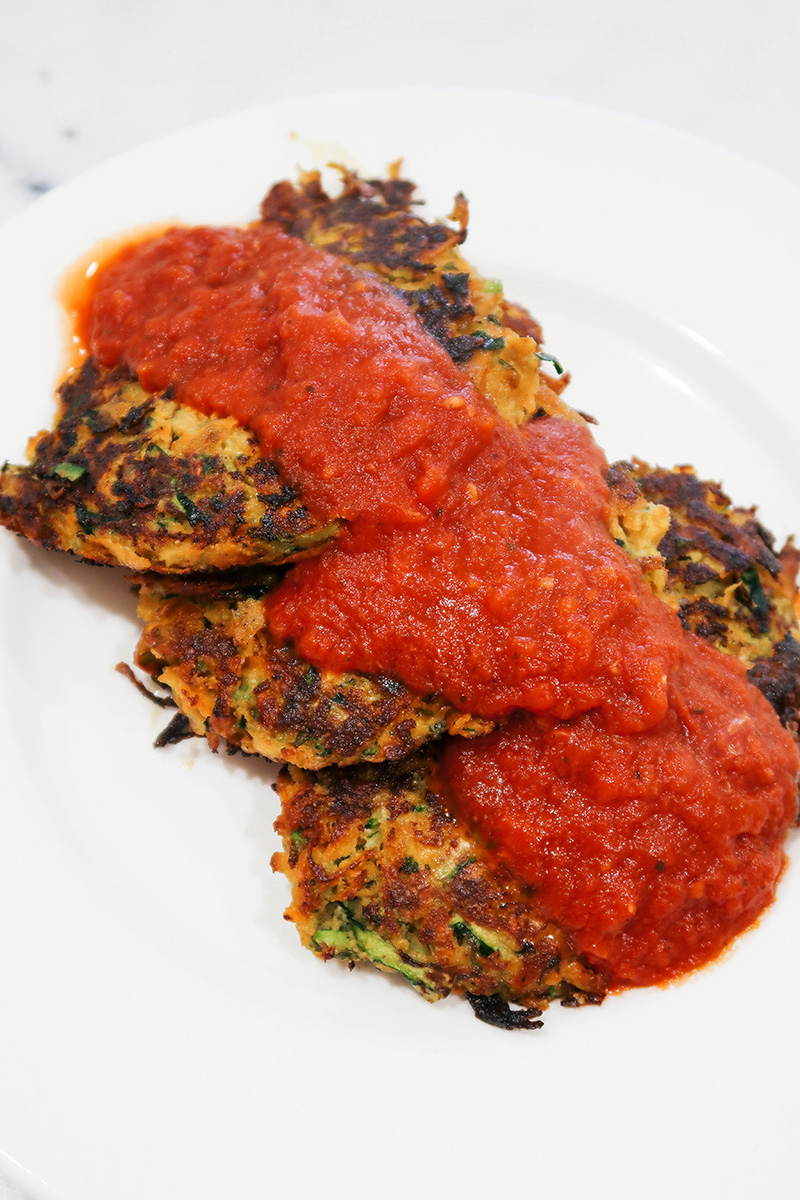 I’m so, so glad to have found this recipe while researching the many yummy meals over on Nom Nom Paleo. It’s one of the easiest of the bunch and only requires three ingredients. It makes a great lunch (with a fried egg, half a chicken filet, etc), or as a side to anything else. I’ve never loved kale more! The bacon grease gets allllll over it, giving it so much flavor. It’s incredible! While I do use the Banyuls vinegar as her recipe recommends, I use very little – I prefer the bacon flavor to the vinegar flavor.

This recipe is a little more labor intensive, if only for the grating of the sweet potato and zucchini. Everything else is super quick and easy! This recipe makes four latkes, so you could eat all four for lunch, or separate into two different meals and serve with a side salad or a fried egg on top. While I absolutely loved this recipe, I did think it required more salt and a sauce to give it a little more flavor – I chose to add Cucina Antica’s marinara. So good! 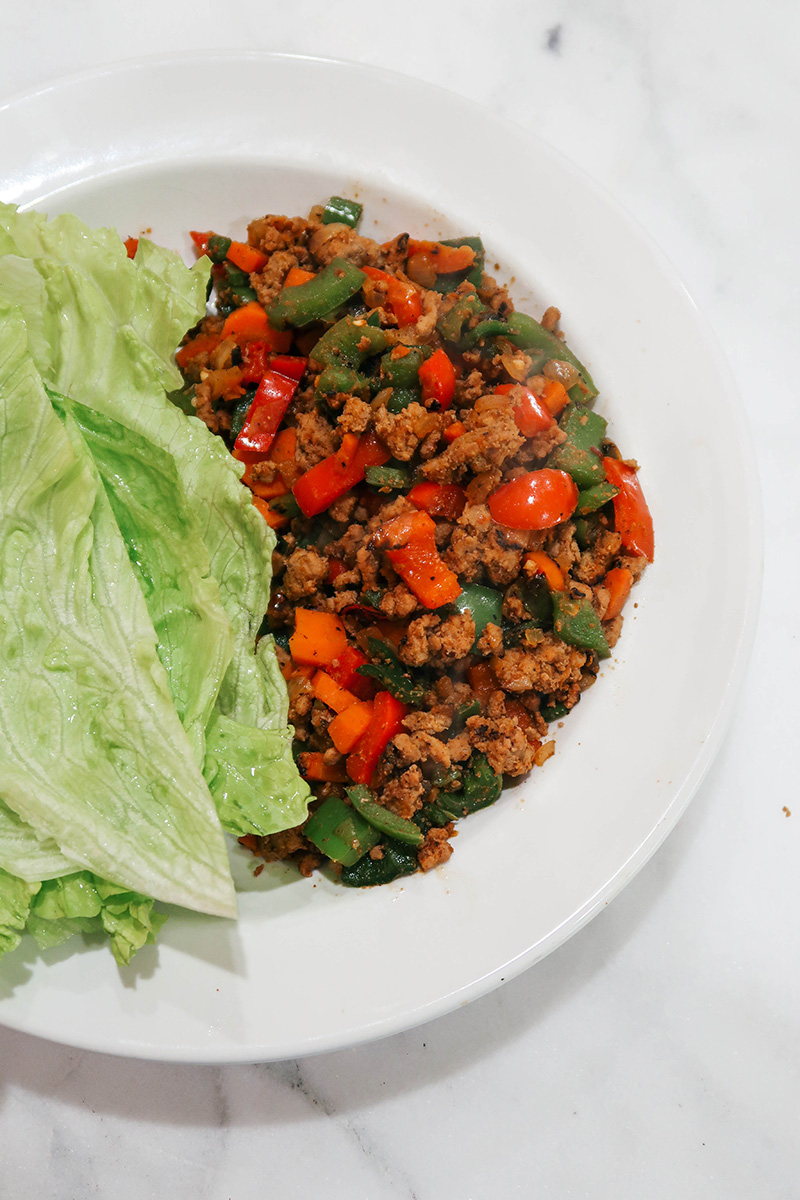 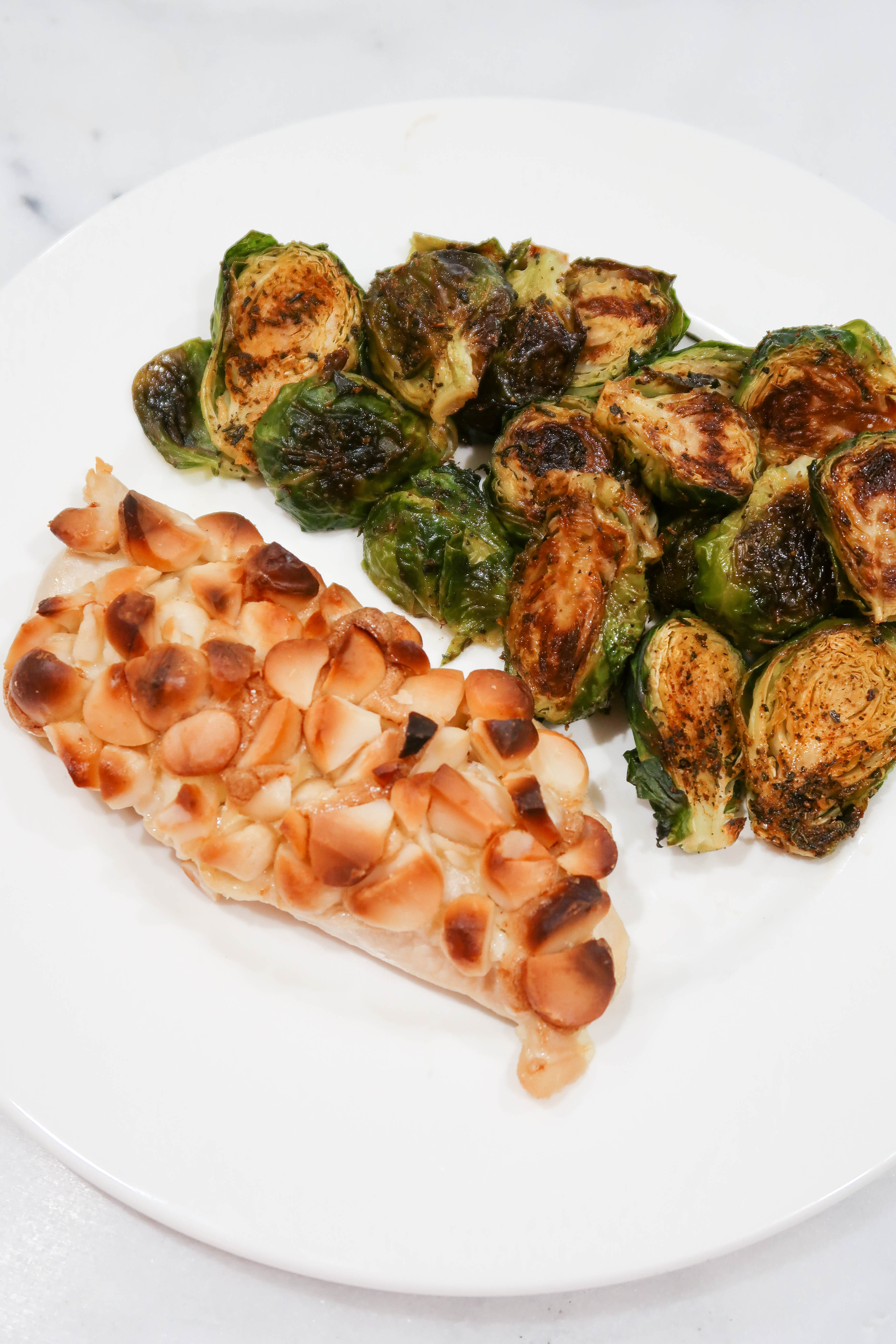 This is one recipe I know I’m going to continue cooking, even after Whole30 is over! It is such an effortless recipe – you just chop up a bunch of peppers and an onion, brown some turkey, throw the chopped veggies and spices and you’re done! One pan dinner. I eat this turkey taco mix with lettuce cups, but you could easily throw over greens for packable lunch for work the next day. There is so much flavor in this – you’ve gotta try it for yourself!

For an easy, yummy dinner that both looks and tastes gourmet, try this recipe. The chopped macadamia nut topping instantly transforms a simple chicken breast into a five-star meal! I’m terrible with food presentation, and even I was able to make this look pretty. A great option if you’re cooking dinner for your beau… trust me, he’ll be impressed. You need to make your own mayo (I love this one!) for this recipe, but once you’ve done that it’s a mindless recipe that even the worst cook could throw together.