my experience with grief 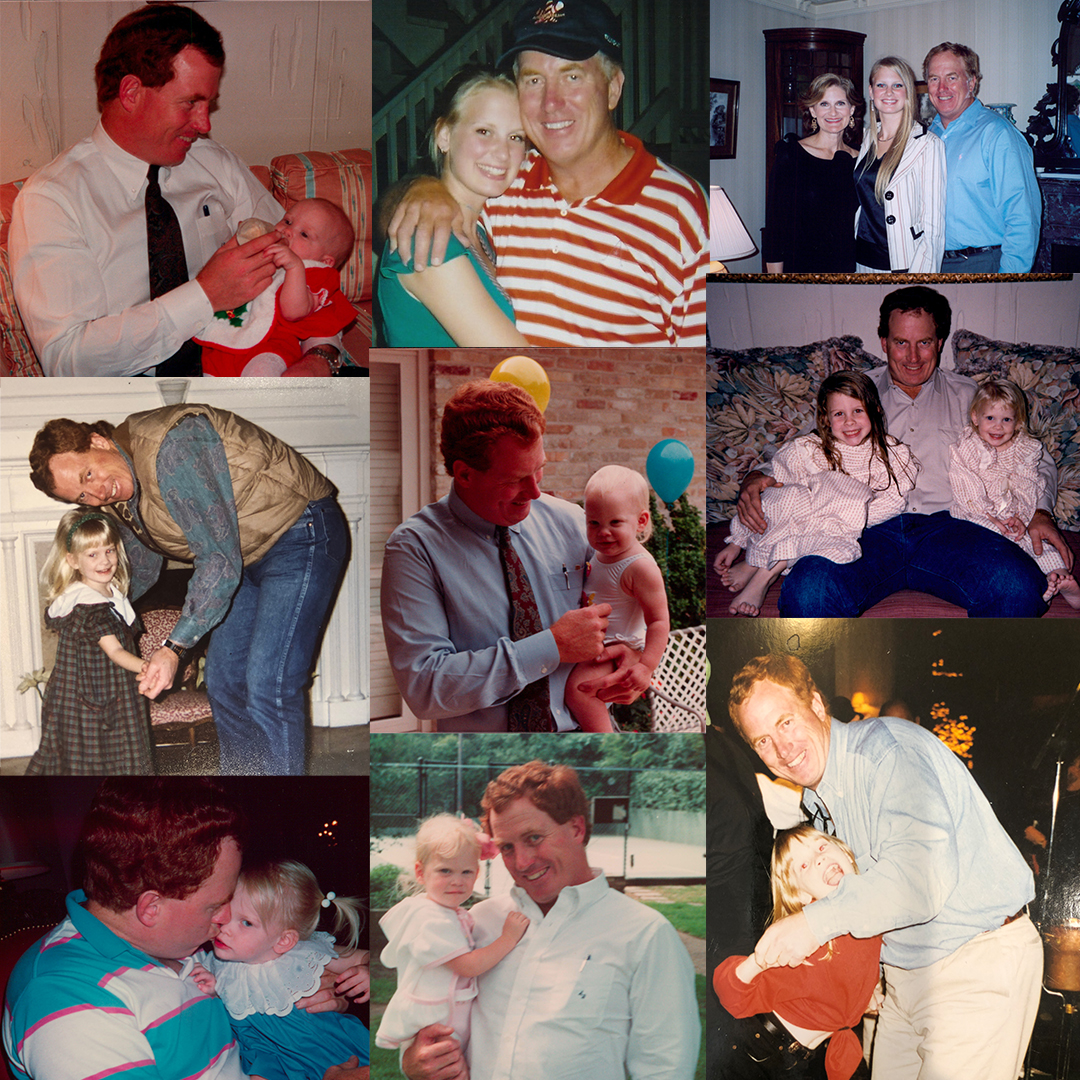 I lost my dad when I was eighteen. I’m not going to lie, up until that point my life was pretty easy. I was loved by two amazing parents who wanted nothing but the best for me, and was always taken care of. I was well-fed and healthy, had a great education, got to travel often, and wanted for nothing. The only unhappy memories I have stem from my own idiotic behaviors in high school – I was a teenager. Sue me. But those were few and far between. But truly, I had a wonderful childhood and always felt supported, loved and cared for. I was quite sheltered and unexperienced, especially when it came to big life moments like the one I was about to get rocked by.

Before I tell you what happened, I want to tell you a little bit about my dad. He was larger than life, and there’s not a person I’ve met who knew him who disagrees. He lived every moment to the fullest – loved A LOT, worked hard, had unshakable faith, was always making new friends, and just truly gave everything he had to whatever was in front of him. To this day, people I’ve never even met come up to me and tell me how much they loved my dad – whether they worked with him in some capacity, met him at a random party or went to grade school with him, everything I’ve heard focuses on how wonderful he was or how he helped those people with something. When you spoke to him, he made you feel you were the only person in the room. Everyone was his best friend, and he was always trying to help others. I know this may sound biased coming from his daughter, but I swear, it is not. He was known as Big Red in our group of family friends, and everyone’s favorite phrase of his was “That’s what I’m talking about!”… and nobody said it like him.

It was during my freshman year at SMU. I had just pledged a sorority a few months before and was having the time of my life! I had awesome friends, was loving school and everything was great at home too. My dad had just celebrated his 50th birthday with all of our close family friends at a ranch he and my mom were renovating the weekend before Easter. He would have been 62 on April 10th this week. It was Good Friday, and I was driving down to Austin with a friend for the holiday weekend. I remember when I got the call so clearly, because I had just dropped her off at a friend’s apartment at UT and was driving the short distance to my old house on Windsor Road. It was my sister on the phone, and she called to tell me Dad was in an accident. My first instinct was to react with anger at her, because I assumed she was playing some kind of a mean joke – I’m pretty sure I cursed at her, but I rushed home none the less.

When I got to my house there were cars everywhere, so I knew it was bad. I walked in the house to find a bunch of our family friends waiting for me (along with my sister and her boyfriend at the time). My mom had already left in a panic for the hospital with my grandparents, so my sister’s boyfriend drove us down there. All we knew was that he had been in an accident – we had no idea of the extent of his injuries or any of the details. It took awhile to get to the hospital, because he wasn’t actually in Austin. He was taken to Brook Army Medical Center in San Antonio, which I later realized was because they have a special burn care unit.

When we got there, we were brought to a waiting room and told what happened. He was at a YPO event in Fredricksburg, and he had gotten on a helicopter with some of the other attendees to fly over to another property for another part of the event. Most of the attendees drove, but my dad was adventurous. Just after take-off, the helicopter clipped a power line and crashed. We hadn’t yet gone into see him, so I was still in the “I don’t believe it” state of mind. Even after getting all of the details and being in the hospital, I didn’t believe it. I literally could not process it, and even months later I had trouble digesting that this all actually happened. Every once in awhile I’ll wake and up and wonder if it was all a bad dream, but then reality hits me.

I don’t remember much about the waiting room, except for there being a lot of idle time – at one point I even started doing crunches on the floor to distract myself (don’t ask me why – shock is a weird thing). We sat there for awhile – I don’t remember how much time had passed before they came and brought us to see him. Again, I don’t really remember the sequence of events here, but I’m pretty sure at that point we knew he wasn’t going to make it. I remember them telling us he had 3rd degree burns over 98% of his body, with his feet being really the only place not injured… they were protected by his boots somehow. So when we went in the room we were allowed to hold/touch his feet. There are a lot of fuzzy memories about this weekend, but that I remember clearly. He was on a respirator, covered in dressings and definitely didn’t look like my dad. I couldn’t take it, so I left the room.

My mom and sister stayed in the room with him for awhile, before they came back out to talk with the doctors and the rest of us in the waiting room. After that, it’s like my sister and I switched places – she then said she couldn’t go back in there, and I just knew I had to. I went back in with my mom when they took him off the respirator. It’s almost as if a light went on in my brain that told me I had to step up and be there, for that and all things following. Subconsciously, I knew I needed to be strong for everyone else. That was the last time I cried for a really long time.

The funeral was a few days later at Tarrytown United Methodist Church, the church we’d been going to since I was a toddler. It was the first time I realized my dad had touched so many people’s lives – hundreds of people came. The sanctuary hit capacity, so the church had to open up other fellowship areas and play the funeral on TV’s on those rooms for people to watch. I mean, I knew he was a well-known business man and philanthropist in Austin, but there were so many people – many I had never met or even heard of. It was incredible. Following the funeral, there was a reception at our house – some of my friends drove in and I remember being so excited to see them. Again, sort of the wrong emotional response – like I said, shock is a weird thing.

I think I stayed home for another week with my mom and sister, but then after that I went back to school and life went back to normal. While my mom was truly grieving and my sister was dealing with the loss in a different way, I just acted as if everything was fine and went back to my everyday routine at school. It wasn’t until I started dating my college boyfriend several months later that the grief started hitting me like a mack truck. I was always fine when I was sober, but the second I had some alcohol in me all the flood gates opened and I would just sob uncontrollably. Looking back, I feel pretty bad for my then-boyfriend that he had to deal with that – but he was great about it.

There was just something in me that wouldn’t let me fall apart, but the second my inhibitions were lowered, all bets were off. I couldn’t control it. I’d act totally fine during the day, but then call my mom in tears in the middle of the night. Everyone grieves differently, but the five stages of grief ring true. I think I was stuck in the denial stage for the better part of a year before the anger hit… which was when the tears started flowing. After a couple of months of telling myself I could handle it on my own, my mom convinced me to go see a therapist to talk it out. If you are struggling with grief (or anything!!!), I highly recommend it. It’s so helpful to be able to talk with someone who has no bias or connection to you –  they will give you honest feedback and help you come to terms with what you are struggling with. While I don’t have any big tips to help you get through your own loss, I would say that it’s better to let the grief in than try to shove it out of your mind. It’s going to come out eventually, and the earlier you can face it the better. With that said, there is no timeline to grief – just be patient with yourself.

It’s been exactly twelve years now since I lost my dad – he died on April 14th, 2006. This many years later the pain is still there, but it hurts a little less with each year that passes. There are still a few things I struggle with that I think many can relate to. There are life events I wish he could’ve been here for (and future ones too), I wish he was here to give me advice in all aspects of my life, and that kind of thing. But mostly I just miss his big personality, giving heart and support as the amazing father and person he was. I miss him every day.

For better or for worse, I believe this catastrophic event at eighteen shaped who I am today. The part of me who is a control freak definitely stems from that, and can you blame me? My reluctance to be emotional and vulnerable stems from a need to be strong for other people. Death is a part of life, and unfortunately everyone will experience grief at some point. The one thing I hold onto is that I know he is in a better place, is watching over me and my family, and I will see him again. God’s got the most incredible, red-headed angel up there!